Model Overview
All versions of the Hyundai Palisade are powered by the same engine, a 3.8L V6 that makes 291 horsepower. Power is sent to the front wheels via an 8-speed automatic, though all-wheel drive is an option across the entire range. Acceleration isn't blindingly quick, but neither is the Palisade slow. It'll have no problem getting up to highway speeds reasonably quickly and never feels underpowered in any sort of normal driving.
The Hyundai Palisade is split into four trim levels with the SE representing the base trim, the SEL and Limited covering the mid-level and the Calligraphy at the top.

Hyundai also includes their smart cruise control system which features stop and go systems as well as a lane follow assist feature, meaning that the car will speed up and slow down with traffic while essentially doing much of the work of keeping the car pointed in the correct direction. It's a fantastic system for reducing driver fatigue on longer drives or even on shorter drives filled with stop and go traffic on the freeway. And since the feature uses many of the same sensors, Hyundai have also thrown in a forward collision avoidance system as standard on the base SE.

Springing for the Limited trim will get buyers nicer, 20-inch wheels, a heads-up display projected onto the windshield, a 12.3-inch fully digital instrument display cluster, a dual sunroof roof, premium Nappa leather seating surfaces and Hyundai's Blind View Monitor system which will display video from a side mounted camera on one of the car's screens any time a blinker is activated. The Limited also gets LED headlights, LED taillights, a 10.25-inch touchscreen for the included navigation system, a 630-watt Harman Kardon premium sound system with 12 speakers, heated and vented 2nd row seats, power folding, unfolding and reclining for the 3rd row of seats and puddle lamps that are projected from under the side mirrors. 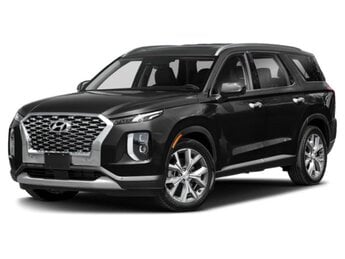